At the close of the A.A. General Service Conference, Lois invited the A.A. Delegates’ wives to lunch at her home, Stepping Stones…She then decide to open an office there with a close friend and neighbor, Anne B.

They received a list from the A.A. Foundation of 87 nonalcoholic individuals or family groups from the U.S., Canada, Australia, South Africa, and Ireland…In May 1951, they (Lois and Anne) sent a questionnaire with the intention of unifying the family groups. As a result…the name Al‑Anon Family Groups was chosen. With A.A.’s permission, they adopted the Twelve Steps, and later (1954) the Twelve Traditions, as guiding principles. 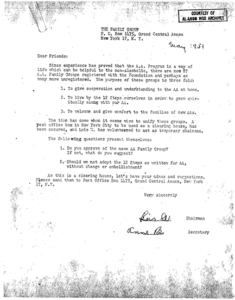